For the first time ever, I have actually found a photograph that sorta-maybe-of course it does fits the theme for Theme Thursday at Clan Donaldson. Taken with the great technical knowledge required to operate my cellphone camera, here is Sir Laughs-a-lot being all celebratory about big trees. Or bored of me taking five trillion and two pictures. But it looks happy, right? So, huzzah! Also, those trees are really big. It's awesome. 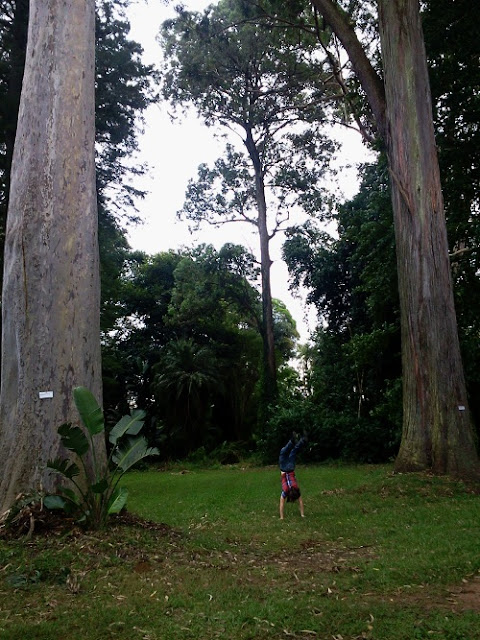 Email ThisBlogThis!Share to TwitterShare to FacebookShare to Pinterest
Labels: just me, light-pictures 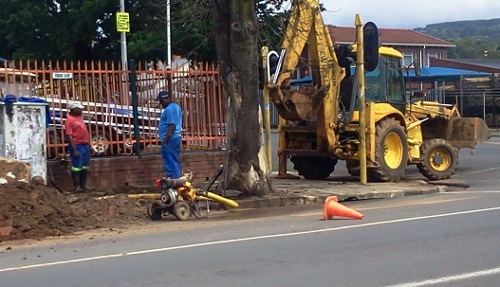 Posted by Unknown at 9:45 AM No comments:

Email ThisBlogThis!Share to TwitterShare to FacebookShare to Pinterest
Labels: just me, light-pictures

I have been very busy lately, with the masses of stuff I'm trying to cram into my head. Formalisms quantum mechanics and principles of thermodynamics and methods of solution of partial differential equations are all buzzing around, needing to be learned before I write tests and just because they're useful.

Then I move to reading for my project and there are all sorts of more specialised things I need to know - everything buzzing around my head is not very much at all.

Marking first year undergrad work reminds me of how much I do know, though. More than the owners of the scripts now covered in red ink (at least when it comes to physics - there are other spheres of knowledge, I know). But the difference between what we know is so very very much less than the masses of things we don't (even just in the realm of physics). None of us know very much at all.

There's a continual tension between ignorance and opportunity. We would never have the joy and excitement of discovery if we knew everything - but there's enough we don't know to go on discovering as long as we care. On the other hand, ignorance in its own right doesn't seem awfully lovely. Somehow, though, I need to love my ignorance at least inasmuch as it gives me the opportunity to abolish it. It's an odd kind of not-quite-dichotomy.

Posted by Unknown at 8:19 PM No comments:

Email ThisBlogThis!Share to TwitterShare to FacebookShare to Pinterest
Labels: just me, universitification

I was going to write a Friday Five post, but I went to bed instead. Then I thought I'd replace it with Saturday Six, but, yeah, well, uh . . . Maybe I can get Sunday Seven to work.

1. My Wordless Wednesday post was all done on Wednesday, I promise. My phone just didn't feel like publishing it till this morning. I think I'll just call today an honourary Wednesday. That works, right?

2. Tomorrow I'm getting on a plane and flying to Grahamstown, where I'm going to sleep for a week. Except for the sleeping part, alas. I'm actually going to FameLab for a week, which is nearly as exciting a prospect.

3. The name "FameLab" makes me think of Harry Potter's first potions lesson, where Professor Snape tells his first years that he can teach them to "brew fame and bottle glory". Do you think I'd be allowed just a tiny sip of the Felix Felicitis potion before the final?

4. Yesterday Sir Laughs-a-Lot and I went to The Last Night of the (Maritzburg) Proms concert with the KZN Philharmonic Orchestra under Richard Cock. It was really awesome. Now I want to go to the opera. And learn to understand all - or at least more - of the technical musical stuff.

5. The concert was in the city hall, and while one might admire the clock tower as one drives down Commercial Road, that has nothing on the sense of being inside a work of art. Inside it! With a pipe organ the size of a small house! And ornamented everything! Oh my!

6. One of the topics I've been covering for my honours project is neural networks - a system that can be implemented on a computer and mimics the brain in learning to make accurate predictions. Neural networks are not awfully like human brains, really, but the way the technique was inspired, as well as the technique itself, is fascinating.

7. Neural networks are one of the topics I'm playing around with using in the FameLab finals. If I don't do that (or maybe even if I do), perhaps I should write up a similar kind of description to put on here. Because I won't, you know, be trying to frantically catch up with my lectures before the slew of pre-Easter break tests. It would be fun, though.

Email ThisBlogThis!Share to TwitterShare to FacebookShare to Pinterest
Labels: art, just me, mathemagical

Wordless Wednesday: Two for One (Playing Catch Up?) 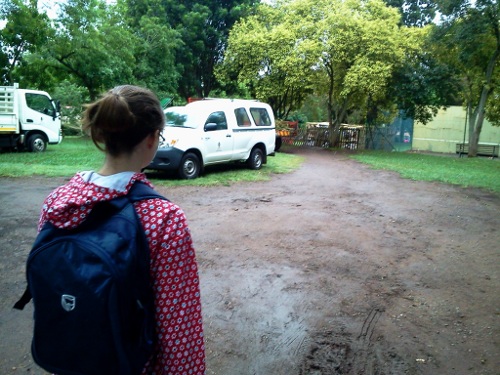 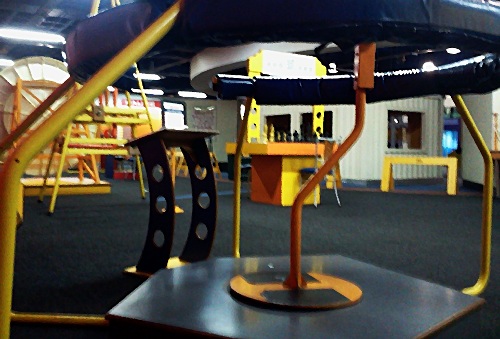 Email ThisBlogThis!Share to TwitterShare to FacebookShare to Pinterest
Labels: light-pictures

Okay, confession: I get confused by this title. The two towers that spring to mind are Minas Ithil and Minas Anor, towers of the moon and sun. The latter doesn't really feature though. The former is probably sufficiently featured to earn a place in the title, although not in its capacity as one of Gondor's pair, but as Minas Morgul of the ringwraiths. The second tower is presumably Orthanc, which features noticeably, if sometimes indirectly, pretty much right through Book III. So the two eponymous towers are only related by, well, being eponymous. And in the book, I suppose.

The titles of the three parts are kind of curious that way, actually. The Fellowship of the Ring is only half about the fellowship proper and The Return of the King is not in my mind the most exciting part of the third volume - although it is a kind of culmination. I'm not entirely sure how much should be read into those titles anyway. Hmm.

Last time I blogged about The Lord of the Rings I wrote a fair bit about the loyalties of the fellowship. Boromir's loyalty to Gondor seems to be somehow twisted into a desire for the ring. Certainly the ring uses that loyalty. But having met Faramir in the second part of the story, we encounter a much purer loyalty. Early in the fifth book Gandalf comments to Pippin that the blood of the Numenoreans runs truer in Faramir than in his brother. Faramir, unlike his brother, resists the temptation of the ring. I think his loyalty to Gondor and her ideals helps him; it's the other side of the coin, perhaps.

At the end of the fourth book, outside Shelob's lair, Sam's struggles with his loyalty to Frodo and the need to see the task through; to make sure right is done. In the end he berates himself for trying to go on with the task and acting out of something other than his loyalty to his master. But it seems to me that his loyalty would be misplaced if it didn't have some sense of the greater purpose and good it serves. I think the very title of the final chapter of Book IV "The Choices of Master Samwise" reflects this dilemma. Tolkien seemed to like the phrase too, judging by its inclusion later in the text.

Faramir and Eomer both aid the Fellowship, thereby disobeying at least the letter of the law issued by their "masters"; Sam would have abandoned his master to complete the quest too, but realises that this is the wrong choice - although with the information he had, it certainly seemed like the best decision.

Sam's status as an obedient follower almost seems inferior to those who thought for themselves and made decisions contrary to instructions, but he gains a peculiarly high position from the fact that he doesn't seem particularly affected by the ring. Only Bombadil comes to mind as being notably less so. Nobility of heart is not, of course, the same thing as holding a noble title or being admired among men, but Sam is a peculiarly concrete example of it. I admire Sam, but I suspect I understand him less than Aragorn, for all his apparent simplicity. Hmm. This probably says as much about me as it does about him!

There's certainly plenty to ponder in this book! I intended to consider a handful of other characters, but this post seems to have grown long and rambly enough already. I think I'll end it here. (Pretend it's not abrupt, okay?)

Posted by Unknown at 9:36 PM No comments:

Email ThisBlogThis!Share to TwitterShare to FacebookShare to Pinterest
Labels: art, just me, once upon a time

I missed my Wordless Wednesday post this week and then I missed my Friday Five too. And I've started reading The Return of the King without blogging about The Two Towers. I could probably blame my honours quantum mechanics course or my insistence on making the wraps we had for dinner from scratch, but I'm going to pin it on FameLab instead.

FameLab is an international event/competition that promotes young scientists "Talking Science" with the general public. Conversely, it promotes people hearing - and hopefully learning - about science, which is a Good Thing in my book. It's all done through the form of three minute presentations where PowerPoint slides and more props than you can carry are banned. This works really, really well, despite its simplicity.

For one thing, "Death by PowerPoint" and related maladies were almost entirely banished. For another, three minutes is barely long enough to get bored. The time limit was strictly enforced by vuvuzela (I assume other countries have equivalents) - although just the threat seemed enough for the people I watched. Regional heats were open to any (practising or studying) scientist in the 21-35 age range, which seems to have ensured that everyone had something worth saying - and not enough time to make it boring.

There was feedback from the judges after each presentation - I was impressed at how much this stayed positive, helpful and interesting to the audience. Presenting and being scrutinised was a little scary - the cameramen and microphones and masking tape squares on the floor didn't help - but an awesome experience.

A handful of us were invited back to regional finals - another three minute presentation a couple of hours later, taking into account the judges' feedback. The fact that it had to be a different presentation seems like a rather effective test of breadth. It felt like a test of improv skills too when we were suddenly called for on-camera interviews! It's surprisingly tricky to do that sit-sideways-and-smile-at-the-camera drill, never mind actually answering questions! Not that I'm complaining: it was all part of the excitement.

The regional finals were awesome. While some of the first round presentation were a bit rough, these were all fascinating. The kind of thing that would make for a great school field trip or the like, I thought. The scientific basis for the zombie apocalypse; a eulogy for coal; forensics and DNA testing. (You can see something of the impressive breadth the presentations covered there too.)

My nails probably owe their continued existence to all the interesting people I had to talk to while the judges deliberated, between the scientists and the competition staff. The compere seemed less friendly when she started stalling the results, though . . .

Three of us went through to the national finals. One of them was me! Um, what? I entered this thing just for kicks - the first round really is an experience in itself (next year I'll be telling everyone else to do it too). I'm just this girl who likes showing people how things work, not some kind of professional anything.

But apparently I'm going SciFest Africa in Grahamstown. I think. If I were dreaming I would've woken up by now, right? And it wouldn't have left me so ridiculously tired.

Posted by Unknown at 1:23 PM No comments:

Email ThisBlogThis!Share to TwitterShare to FacebookShare to Pinterest
Labels: just me, kicking up a fuss, mathemagical, on physical grounds
Newer Posts Older Posts Home
Subscribe to: Posts (Atom)
I like counting, stars and infinitives. Welcome.