1. It's Sir-Laughs-a-Lots' birthday tomorrow. (Happy birthday!) We're going to do silly celebratory student things. No, not that kind. The kind where you realise you have the reading comprehension of a grad student and a pile of children's books and what are you waiting for? Yay.

2. Today I wrote my last test of semester, and our lectures are finished. Exams are looming only in a manageable couple of weeks, so tomorrow we're going to do silly celebratory student things . . .

3. The test I wrote today may be the last maths test I ever write. (I take all my courses from the physics department next semester, and if I'm lucky that could be the end of coursework.) It's kinda weird.

4. Do I sound like Hermione Granger if I say I want an analysis textbook for bedtime reading? We've touched on functional analysis in this PDE course and while I don't feel much need to do the proofs myself (though it would be fuuuuuun), but I think it's be interesting, useful and, relevantly, doable to get a sense of the terminology and what the results actually are. Maybe I could find an analysis for physicists book. Hmm.

5. Although while I don't want a full-of-detailed-proofs book, I kind of want a rigourous one. We can pretend that makes sense, right? It's like, I was talking to one of my lecturers about an applied physics course and he said "Well, for a pure mathematician like yourself [. . .]" Now, I'm certainly not much of a pure mathematician if I haven't even read much analysis (I do know a very little), but I guess I'm pickier than most about maths being done properly. As it should be.

And there's today's allocation of nerdery. If you know of a readable introductory source on analysis, I'd love to know, though I don't promise I'll actually get to reading it.

Email ThisBlogThis!Share to TwitterShare to FacebookShare to Pinterest
Labels: just me, mathemagical, universitification

I finished two children's fantasy classic-y things recently, and thought I'd write about them together, although it probably won't turn out to be dreadfully matchy.

Sir Laughs-a-lot and I have been working our way through the Narnia books together, although the order has got a little muddled (we did at least start with The Lion, the Witch and the Wardrobe). His childhood, unlike mine, was not filled with rereading the Narnia books over and over and over (they're short - I could get through a couple in an afternoon) which meant we came at it from quite different perspectives. He wanted to know what would happen next and was surprised by the surprising bits. I was bundled up in a sort of anticipation that's almost worse than suspense. Which is not to say that I didn't enjoy it - but I think reading aloud and reading together made it more obvious how much my mind was other places in the story than what we were actually reading. It takes a bit more effort to relax into the moment than otherwise, perhaps. Having said that, if I haven't read a book, I spend a fair bit of brainpower on second guessing what'll happen next, so maybe that's just me.

I think I have read the book too many times to write a brief impression post without being either dreadfully specific or taking more time away from my mathematics than is quite wise. I think it may be my favourite of the Narnia books, though we'll see as we read further!

This is also a book that I first read as a kid, but I can't say I'm nearly as nostalgic about it. I read it because I needed a light read and it was on my Kindle app from months ago when Amazon had been offering it free. I enjoyed reading it and was drawn into the story, but I remain a little bemused as to why people get so very emotional over the series.

The setting - an abbey of mice sheltering various woodlan creatures, attacked by a horde of evil rats - is admittedly quite awesome. In "On Fairy Tales" (I think!) Tolkien draws a distinction between fantasies involving talking animals and "beast tales", which are essentially stories about everyday life, acted out by animals. (He points out that this allows for rather harsher points against some animals than wemight be comfortable with against actual people.) Redwall certainly has elements of that. But it has ancient prophecies and legendary sword and visions in dreams too, which seem to make it fantasy anyway. The combination works well. I will freely admit to spending chunks of time reading Redwall cookbooks and otherwise revelling in the setting.

I think what bothers me about the book is what I'm tempted to call Heaviside character development. In maths, a Heaviside function is zero up to a certain point, and one everywhere after that. It's not continuous. A lot of character development in Redwall feels to me - I think, maybe - like a series of Heaviside functions. Matthias is a bumbling Redwall novice. Oh no, Cluny the Scourge is coming! Level him up to inexperienced warrior, quick! It's not implausible that the change would happen - the change is a big part of a good story, for me - but I'd have liked to see a bit more of the internal turmoil and growth and not just a Heaviside archetype function. The plot felt a little like that too - different elements didn't always seem like consequences of what had gone before. They just kinda happened.

That said, I definitely enjoyed reading the book. I would certainly be less nitpicky if I didn't know other people adored the series. I liked the book (and the rest of the series), but I think it gets a bit too Heaviside-ish (and perhaps formulaic) for my liking.

Posted by Unknown at 8:30 AM No comments:

Email ThisBlogThis!Share to TwitterShare to FacebookShare to Pinterest
Labels: once upon a time

I sat down to study today. I cleared my desk properly for once, and finally actually handwashed the tie-dye shirt that's been sitting there (now it can go into the laundry with everything else). I gave my hopefully-not-dead-yet pot plants some attention that they probably needed quite a while ago, and got mud all over my notes and the carpet. So while I was cleaning that up I gave the rest of my room a quick going over too.

It's almost procrastination, but the tidy, organised environment did seem more conducive to sitting down for two hours and making maths notes. Besides, it all needed to be done, right? It's nice to revel in the straight lines and neat corners that come with exam season before it really gets going.

Once exams are actually upon me I know those corners will seem poky, but a (relatively) clear schedule and a clear desk look quite inviting right now. There's space to breathe. 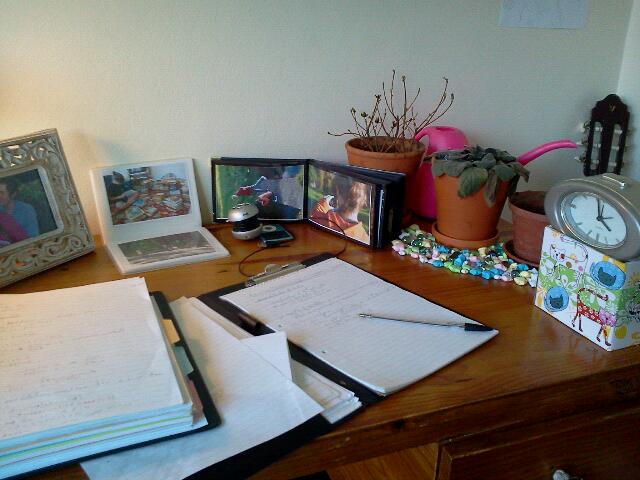 Posted by Unknown at 9:22 PM No comments:

Email ThisBlogThis!Share to TwitterShare to FacebookShare to Pinterest
Labels: just me, universitification

1. We cooked spaghetti and meatballs for supper Friday night and it turned into a fancier meal than I expected. I'm not sure if it was because making meatballs is a little more effort than I usually go to or just Friday night fanciness or some happy serendipity, but it reminded me that cooking can actually be fun. I need to find more time and energy for that on a regular basis.

2. Quantum physics is weird. Niels Bohr (one of the founders of the subject) once (somewhat) famously said that "Anyone who is not confused by quantum mechanics has not understood it." This makes for some really cool stuff, but also makes it tricky to tell whether there's a typo in your notes or things really are just that weird.

3. I spent quite a while persuding the campus bookstore to source books from the suppliers for me. The online people would do it happily, but they couldn't process the gift card I'm using to finance the purchases. However, I now have a couple of books I've been wanting to read - that weren't even on special - on the way. This is exciting!

4. My siblings have all attended schools that presented book vouchers with academic awards, but I never did. I feel like part of the club now that university's doing it too.

5. Wednesday was a public holiday. It was wonderful to have a day off from classes, and while chunks of it were filled with homework, other chunks were filled with a tie-dye project It was fun! I could get addicted to this stuff.

Posted by Unknown at 1:08 AM No comments: